We opened on tea@Hart on 8th December 2014 on a tight budget, having just four weeks from signing a lease to having to welcome customers (and raising some capital by selling games in a gazebo amongst piles of tools and paint). Our first customers will remember games nights upstairs, playing on folding tables with bedsheets disguising the crumbling walls. It’s impossible to say how much we owe to those early customers who sat through paper plates, fan heaters, and cramped conditions!

But the story really begins with a family who enjoyed playing games, and Jeni’s baking hobby that soon grew too large to fit around her day job. Sometime around 2012, having talked to friends and being introduced to tabletop, a whole new world of gaming opened up to the Harts! At the same time, Jeni began moving from making cakes for family and friends to tentatively beginning a business with cupcakes and celebration cakes, under the name 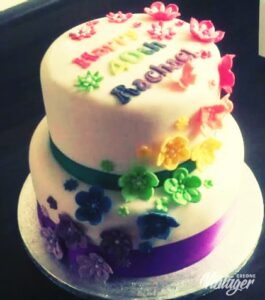 ‘Jeni Made Cakes‘. When the time came to decide to move the business to a full-time position we combined it with community-worker’s motivation to ‘bring people together’ at a time when many community building initiatives face decline.

Thus the original ‘tea@Hart’ was born!

The story doesn’t end there – in 2020 came the pandemic. A games cafe-model wasn’t going to be sustainable, and while some games we could cater for, it’s hard to play board games and RPGs with social distancing in place. For a long time we’d wanted to do more with the social and educational side of gaming. Between the owners there was an unusual career mix of educational research, teaching, occupational therapy, youth work and community development. tea@Hart had collected so many positive stories of people who found a safe space to meet others and grow their social circle, and families found new hobbies and saw their children flourish. So we put all these together to think about how we could (1) be safe and responsible in unprecedented times, (2) focus on education and combating social isolation, (3) support our existing community of gamers, and (4) build on the work we’ve done with ‘People’s Meeples’, a community organisation focussing on promoting the educational and social aspect of gaming, particularly with autistic young people.

Which brings us up to date. tea@Hart has morphed into Gamers@Hart. We’ll still serve great food, but we are offering a huge games library for people to borrow, running events that can be done safely (including Magic: The Gathering, Pokemon, and YuGiOh), and focussing on supporting home schoolers and providing opportunities for kids to get involved in gaming with all the benefits that come along with it.

Use the code 'closingtime' for 15% off! Dismiss